I wasn’t enthused at that point if I’m honest, nor was I particularly fond of a ‘fixie’ at that very moment.

However, as time went on I have to admit I came to like this bike for all its quirks and so began my fascination with fixed gear bikes.

So what about single speed, where do they fit in?

What’s The Difference Between Fixed Gear And Single Speed?

The actual difference between a fixed gear bike and a single-speed is minimal. Something you may not even notice if you didn’t know what you were looking for.

So what should you be keeping your eye out for?

It comes down the rear hub and the single cog.

A single-speed is fitted with a freewheel cog. It rotates freely one way but will lock up the other way.

This all means that the cog will make the rear wheel move when you’re pedaling. When the rear wheel begins to turn more quickly than the cog, it starts to freewheel. All very similar to a regular geared bike.

Moving onto fixed gear bikes, that mechanism isn’t there. The cog is fixed to the hub (see how you get the name now? Clever, isn’t it? 😀).

As it’s fixed, when the rear wheel turns, the cog turns. The cog turning causes the pedals to turn.

That may not sound like a massive difference but it does make a difference as to how the bike rides I’ll get into that a bit later – but right now, let’s look at each bike type a bit more.

A lot of fixie riders feel like the bike becomes part of them when they’re riding. It’s that instant connection. When you start to pedal, the bike reacts. Lock up the pedals and the rear wheel will slide. Pedal backward…you guessed it, you’re going backward. Not before the bike has stopped you that is, usually at quite a pace.

I’m not going to lie, the first time it happens, it’s quite a shock but it becomes a charming one in time. There is something addictive about a fixie.

A fixed-gear bike doesn’t have anything else to give, if you need to get up a steep hill, you’re going to have to dig deep and get up there…but that’s good! In the long run that’s going to make you stronger. You’re forced to work harder than you would have to on a geared bike. The results will come, I promise.

In the same way, if you want to go down that steep hill, you’re going to need to keep up. There’s no coasting with a fixie. You need to pedal to keep it moving. Again, see this as a positive! You will need to learn to adapt to riding with a huge range of cadences.

On a steep hill, you could find yourself hitting 200rpm. This sounds crazy if you’ve never been on a fixie before but it’s just something you get used to. It doesn’t take long either. After a week or so, those hills you thought you’d never get up, you won’t remember what the fuss was about!

Being able to use the pedals as a way to brake can become useful. It gives you an extra level of control that you don’t get anywhere else and that’s pretty special.

If you’re like me, I don’t get all that excited about bike maintenance. I don’t mind a bit here and there but I like to ride more than I like to maintain. This is where a fixed gear bike really shines. Bit of lube on the chain occasionally and you should be good to go. There aren’t any gear cables or derailleurs to keep an eye on, it’s as simple as it gets.

Ultimately, cycling is about having fun and that’s exactly what a fixed gear bike can give you. It’s a novelty that never really wears off. For most people, you won’t want it as your only bike (who only wants one bike, anyway!?) but a fixie can reignite your love for cycling in a way that no other bike can.

Getting to grips with a fixie? Here are some tips!

Enough about fixies, sometimes you don’t always want to be pedaling. Sometimes cruising is what it’s all about. Sometimes a single speed is the answer.

It also means that on longer rides you do get the opportunity to give your legs a much-deserved rest.

One of the biggest advantages of a single-speed bike is how simple they are to ride, there is nothing complicated about them and they behave how you’d expect. This makes transitioning to them straightforward.

A good thing about single-speed bikes is that they tend to be lighter than a geared bike for the simple fact that they don’t have the same number of parts. Lighter bikes mean it’s easier to maneuver, more practical, and more portable. All pluses!

There are some negatives though, although not a huge one in my opinion! With a single-speed bike, you are somewhat limited to the speed you can achieve. With a geared bike, you can change gear and this can increase your speed. Not the case with a single-speed, you’re limited by your cadence alone. For me, I quite like that, it’s as natural as it gets.

If you’re wanting a great way to train, a single-speed is that. No-fuss, no-nonsense, no gears, just your legs, and the road. Can I also just mention that when you ride a single-speed, you never have to think that you’re in the wrong gear. You’re always in the right one 😂!

You probably want to consider the terrain when you’re deciding between a fixed gear bike and a single speed.

Got a lot of hills in your area? A fixed-gear bike could make the rides much more enjoyable.

Whereas if you ride on largely flat terrain, then a single-speed bike might be the right solution.

Another big question is which is better, freewheel or cassette?

A lot of this comes down to you and what you want to get out of riding, where you want to ride, and other such things.

A fixed-gear bike will be good for you if:

Whereas a bike with a cassette would be good for you if:

Both types of bikes are capable of doing very similar things. A fixie or single-speed bike can go up a climb. Just like a road bike can be ridden in a city.

One thing to be aware of when you’re making your decision is the limitations of each type of bike. It’s also a reason why people end up with a number of different bikes (n+1 anyone?). Every bike is suited to a different style of riding. Each has their own strengths and weaknesses.

That’s the joy of cycling – there’s something out there for every rider!

Fixed gear bikes are efficient when you account for the amount of energy you put in compared to a similar gear ratio.

Want to get to grips with your gear ratio? Watch this!

A fixie will also get you used to riding at a higher cadence so when it comes to taking your multi-gear bike out, you should find your performance has improved.

However, when you compare fixed gear vs single speed, that’s when things get tight.

With the single-speed you can coast and that gives you a break, potentially allowing you to cover more distance with the same amount of energy.

Having said that, a fixed gear bike does often win when it comes to speed on flat ground and uphill so there is that!

Why are fixies so popular?

They make fantastic commuting bikes, especially in the city. The initial cost of a fixie is usually less than other bikes. They don’t require a lot of maintenance so they suit a commuter well on many levels.

For other riders, they are a fantastic way to get a different form of exercise. I can’t begin to imagine how I’d get on trying to climb some of my local climbs on a fixie…but I’d like the challenge!

Compared to other bikes, they tend to be lighter in weight simply due to the number of components. That’s a good thing in every situation. Long rides. City riding. You name it!

Are fixies bad for your knees?

Provided you are geared appropriately for your fitness and the type of riding you do, there is no evidence to suggest that riding a fixed gear bike is bad for your knees.

However, if you have a pre-existing knee condition then you may wish to seek further advice from a professional as the ‘lock in’ feeling a fixie can give can make things worse, depending on your knee injury.

As with anything medical, it is best to seek professional advice.

Still can’t decide between a single-speed or fixie? I’ve got some good news for you…you probably don’t have to.

A lot of fixed-gear bikes come with a flip-flop hub. This gives you the option to switch up how you want to ride from fixed to free in the time it takes you to flip the rear wheel.

Whatever you decide, embrace the lack of multi-gears. It’s liberating!

Still need help? Check out our beginners guide to picking the perfect bicycle. 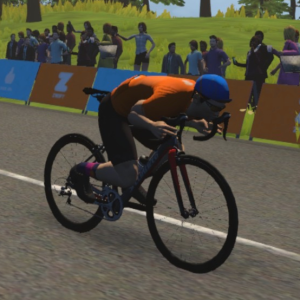 Hi, I'm Harry, the owner of this site! A 30-something MAMIL - a middle-aged man in lycra. An avid cyclist who is looking to maintain a baseline level of fitness to be able to enjoy the great outdoors on weekend rides with his mates!

The Cycling Point is a participant in the Amazon Services LLC Associates Program, an affiliate advertising program designed to provide a means for sites to earn advertising fees by advertising and linking to Amazon.com. Amazon and the Amazon logo are trademarks of Amazon.com, Inc or its affiliates.